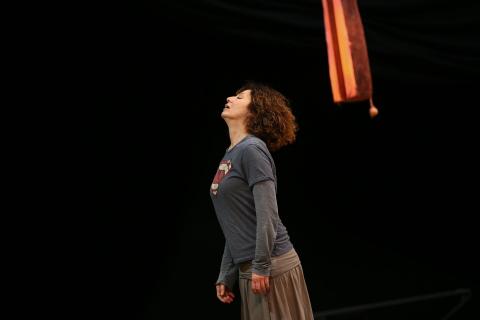 Under the direction of the world-famous Albanian artist Adonis Filipi, the İzmir State Theater's actors are rehearsing to present the play "Medea," which was first staged in 432 B.C., to the audience.

Written by Euripides, the ancient Greek tragedy "Medea" will meet the audience again in modern halls, ancient theaters and international festivals in İzmir.

The play is about İason, who leaves his wife Medea to marry the Greek princess and tells the transformation of a proud and hurt woman. It is being rehearsed by the actors of the İzmir State Theater under the direction of Filipi.

The premiere of the play, which contains strong emotions such as betrayal and revenge, will be held at the Bozkurt Kuruç Stage of Bornova Culture and Art Center on Nov. 27.

The play was translated into Turkish by Metin Balay. Its light design was made by Fuat Fırat, décor by Hakan Dündar and the costumes by Yıldız Köse.

Noting that the ancient world tragedy "Medea" was written in 432 B.C. and is still a challenge for all directors today, Filipi stated that the problems described in the play still exist today.

Expressing that there are great similarities between the people of Turkey and Albania, Filipi said, "There are great similarities in the characters and cultures of our countries. Theater is also important in terms of development and cultural exchange. For me, this play is an international project. I believe it will be exhibited in international organizations and festivals....