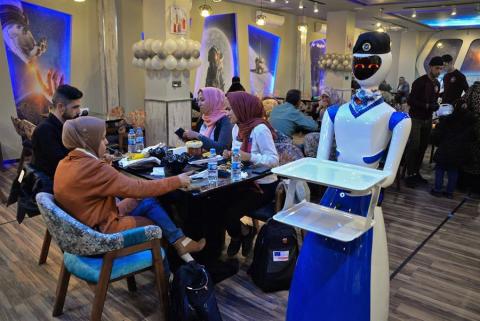 From the rubble of Iraq's war-ravaged city of Mosul arises the sight of androids gliding back and forth in a restaurant to serve their amused clientele.

"Welcome", "We wish you a good time in our restaurant", "We would be happy to have your opinion on the quality of the service", chime the automated attendants, red eyes blinking out of their shiny blue and white exteriors.

"On television, you see robots and touch-screen tables in the United Arab Emirates, Spain and Japan," said Rami Chkib Abdelrahman, proud owner of the White Fox which opened in June.
"I'm trying to bring these ideas here to Mosul."

The futuristic servers are the result of technology developed in the northern city, erstwhile stronghold of the Islamic State jihadist group.

"We saw the concept on social media in more than one restaurant," said Abdelrahman, a dentist by profession.

Occupied by IS between 2014 and 2017, the northern metropolis of Mosul still bears the scars of war.
But at dinnertime, patrons of the restaurant that is packed every night can escape from the city on a voyage through space.

An astronaut floating across the muralled wall sets the scene and views of Earth and other planets as seen from space give customers the sense of peering out through the portholes of a spaceship.
The ceilings are speckled with glowing constellations.

But the star attractions remain the two androids, sporting a scarf and black beret, shuttling back and forth across the restaurant on rails to deliver orders.
As they approach, smartphones come out and children promptly line up next to them for a souvenir snapshot.

The robots are imported, Abdelrahman explained without giving the source, adding that everything in the...

Technology in the service of rescuers

The Mediterranean diet really is that good for you. Here’s why

Biden to host Netherlands PM for talks on tech, Ukraine

US and Japan: China is the Biggest Strategic Challenge

İYİ Party to mobilize youth to vote in May 14 polls

Rains in a week may ‘save agricultural production’

Classified documents at Pence's home, too, his lawyer says