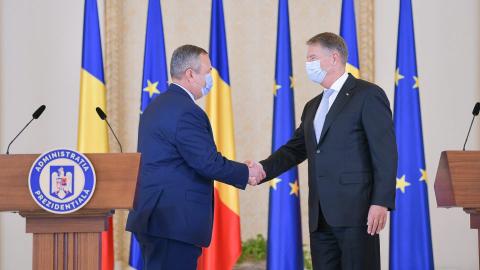 President Klaus Iohannis nominated the former defence minister and reserve general Nicolae Ciuca as Romania's next Prime Minister of Romania on Monday after talks with most parties in parliament.

"A solid majority has been formed in parliament, including the National Liberal Party, PNL, the Social Democratic Party, PSD, the Democrat Union of Hungarians in Romania, UDMR and the ethnic minorities' group. This majority proposed me a name of a prime minister, and I accepted," stated Iohannis.

Representatives of almost all parliamentary parties on Monday joined the consultations with the President on the nomination of a new Prime Minister.

The PNL and PSD agreed to split the next three years into two, with two Prime Ministers from each party. The first will be Ciuca, and the second most probably the PSD's leader, Marcel Ciolacu.

Iohannis said he had appointed Ciuca to form a government team and appear before parliament for a vote of confidence, due on Thursday.

For his part, Ciuca said he had worked with others to compile a governing program and form a solid coalition in parliament that would ensure the country's stability.

"Romanian citizens expect stability and for us to be able to solve the effects produced by the COVID-19 pandemic and the energy crisis, and to have a government program that can implement the necessary decisions for implementation of [EU] the Recovery and resilience plan for Romania, PNNR," Ciuca said.

Romania will receive 29.2 billion euros from the EU recovery plan, 14.2 billion in grants and 14.9 billion in loans.