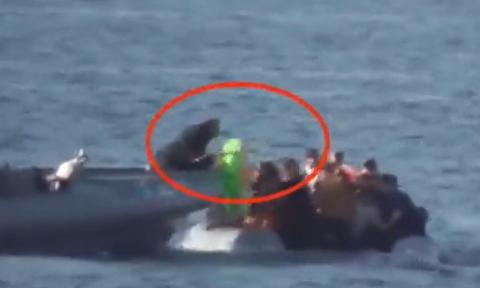 Greek forces continue to push irregular migrants, including women and children, into Turkish territorial waters in the Aegean Sea.

The Turkish Defense Ministry shared a video of Greek Coast Guards pointing guns at refugees, battering and pushing them into Turkish territorial waters.

The coast guards can be seen clearly in the footage, dragging migrants' boats into Turkish territorial waters.

The Greek forces also used dangerous maneuvers and attempted to sink the migrant boat to prevent it from passing despite the announcements and warnings made by the Turkish side over the radio.

The footage also includes moments when Greek forces opened fire in the air and around the boat.

"Humanity is once again trampled in the Aegean! Shame on you!" he wrote on Twitter, sharing the video.

Recalling his meeting with European Commission Vice President Margaritis Schinas on Nov. 20, Oktay wrote that he conveyed the expectation that Greece's inhumane pushbacks are unacceptable and that Frontex and the Greek authorities must fulfill their responsibilities.

The units were dispatched to the area after reports regarding irregular migrants off the coast of Ayvacık district in Turkey's northwestern province of Çanakkale.

A total of 40 asylum seekers were rescued from a rubber boat, the Coast Guard said in a statement.