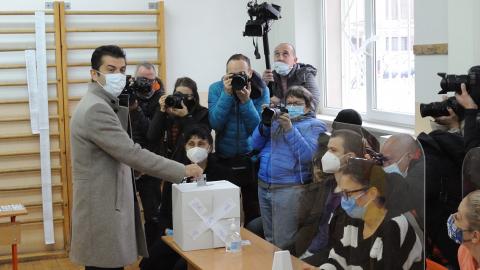 Kiril Petkov, co-leader of the We Continue the Change party, votes at a polling station during the general elections in Sofia on November 14. Photo: EPA-EFE/VASSIL DONEV

The sessions are being livestreamed on We Continue the Change's Facebook and YouTube accounts and are expected to continue until Saturday.

We Continue the Change is talking to parties that oppose former Prime Minister Boyko Borissov and his GERB - United Democratic Forces alliance. Excluded from the talks are the Movement for Rights and Freedoms, which is seen as a partner of Borissov and the political status quo, and far-right newcomer party Revival (Vazrajdane), which uses pro-Kremlin and COVID-denialist rhetoric.

The first session was focused on improving the country's economy. Georgi Ganev of Democratic Bulgaria said that all businesses affected by COVID-19 should be compensated without so many bureaucratic obstacles.

Mika Zaykova of the There is Such People party argued that the new administration should focus on "the economy of knowledge".

"There is a noticeable brain-drain. We must find a way to bring part of the Bulgarian diaspora abroad back to the country and think about a major reform of education," said Zaykova.

At Tuesday's talks, the Bulgarian Socialist Party also pointed to the need for a better qualified work force and strategies to better support small and medium-sized businesses.

One of the new ideas proposed by We Continue the Change is the forming of an 'innovation board' in collaboration with the ministries of culture and education...