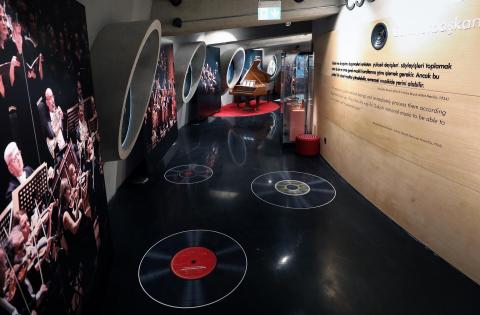 Instruments that have been used by the Presidential Symphony Orchestra (CSO) throughout its nearly 200-year history, various documents and belongings of the orchestra are presented to the visitors at the CSO1826 Exhibition Area in Turkish capital Ankara.

The historical process of the orchestra's polyphonic music culture is featured with various archive documents and period photographs in the exhibition area opened at the CSO Ada Ankara Campus.

The horn from the first quarter of the 19th century, used by musicians, the bell from 1838, various materials from different years, and instruments such as harps and harpsichord used by the orchestra are among the items in the exhibition.

The exhibition area also offers visitors the opportunity to listen to some of the works performed by the CSO. The recording starts to play when the visitors come over the plaque patterns placed on the floor. This way, music lovers have the opportunity to listen to recordings such as Beethoven's 6th Symphony and Tchaikovsky's Piano Concerto while walking around the exhibition area.

Speaking to the state-run Anadolu Agency about the exhibition, CSO Ada Ankara Art Gallery and Museum official Ercan Yalçın said that the exhibition area is open to visitors during the day and it can also be visited outside the concert hours.

Noting that the orchestra is an art institution that stands out in the international arena as well as its role in Turkey, and hosts world-renowned musicians and conductors as its guests, Yalçın said, "CSO is the shining star of Turkey as a collective art institution that has performed concerts and toured in more than 100 cities in 36 countries on three continents since 1917."

Reminding that the CSO was the orchestra that played the...