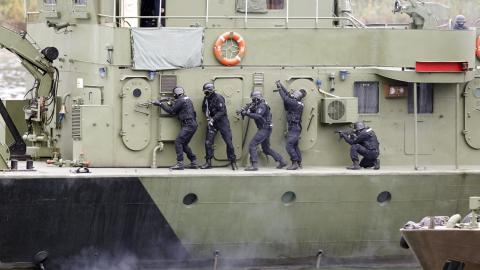 Izabela Kisic, executive director of the Helsinki Committee for Human Rights in Serbia, said there were "huge differences" in the punishments handed down against Serbian citizens convicted of joining Islamic State in Iraq and Syria and those who fought on the side of Russian-backed rebels in eastern Ukraine.

"Practically all of those who went to Ukraine received suspended sentences or were acquitted, that is, they admitted guilt and then they were released," said Kisic.

Predrag Popovic, programme director at the Belgrade Centre for Security Policy, BCSP, said more needed to be done to confront the threat from right-wing extremism.

"It should be emphasized that those in power must play a greater and more significant role in the fight against right-wing extremism, especially in condemning their activities, which are full of hatred and violence - most often verbal, but also physical," said Popovic.

The Counter-Terrorism Service of the Criminal Police Directorate at the Serbian interior ministry did not respond to questions concerning the implementation of the current strategy and what will follow it.

Contradictions in treatment of foreign fighters

Serbia's anti-terrorism strategy has attracted headlines before, notably when an arm of the finance ministry launched a probe into money laundering and terror financing against 20 individuals and 37 non-governmental organisations, including investigative media outlets, journalists and prominent human rights organisations.

But beyond apparent politicisation, Serbia's anti-terrorism strategy suffers from blindness to...