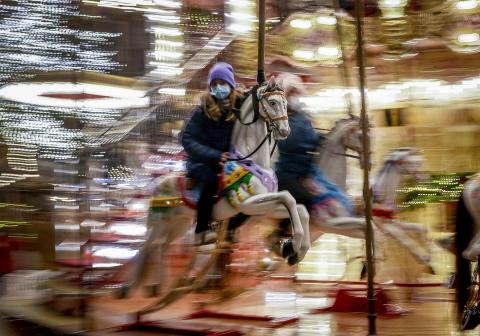 Germans were warned on Nov. 22 they would be "vaccinated, cured or dead" from COVID-19 by the end of winter, as Europe battles an upsurge in the pandemic that prompted a U.S. travel advisory.

Belgium and the Netherlands are still reeling from clashes that rocked weekend protests against new anti-COVID measures.

Europe's return to the pandemic's epicenter has been blamed on a sluggish vaccine uptake in some nations, the highly contagious Delta variant and colder weather moving people indoors again.

"Probably by the end of this winter, as is sometimes cynically said, pretty much everyone in Germany will be vaccinated, cured or dead," German Health Minister Jens Spahn said, as he urged more citizens to get the jab.

The State Department urged Americans on Nov. 22 not to travel to Germany and Denmark due to the soaring cases there.

The department issued Level 4 travel advisories - the highest level - for both nations, "indicating a very high level of COVID-19 in the country".

She told a meeting of leaders of her conservative CDU party that the situation was "highly dramatic", according to participants.

With intensive care beds swiftly filling up, Germany's worst-hit regions have ordered new shutdowns, including the closure of Christmas markets.

The restrictions mirror those in neighbouring Austria, which closed shops,...