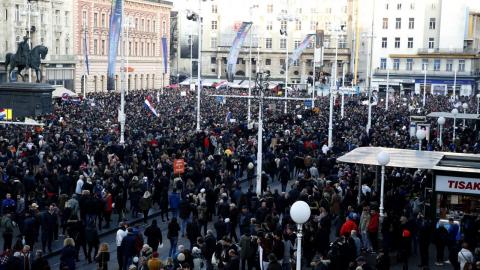 About 30 students gathered in front of the Faculty of Humanities and Social Sciences at Zagreb University on Monday afternoon to protest against the mandatory COVID-19 certificates they now need to enter the premises.

Croatia made the certificates mandatory from November 16 for access to public and state buildings like the Faculty of Humanities and Social Sciences, which has some 7,000 students and 700 employees and is one of the largest university faculties in the country.

One of the student protesters told the Dnevnik news website that he didn't trust COVID-19 vaccines because he believed that they had been approved by the authorities too quickly, and vowed to "resist any form of segregation or discrimination".

On Monday evening, a religious studies teacher also staged a protest in front of the Ministry of Science and Education to oppose the mandatory pass he needs to enter the school in which he works. He said that and has already received one warning.

So far six healthcare workers and four workers in the social care system have been fired for refusing to be tested for the virus before entering their workplaces. People are eligible for the COVID-19 pass if they have been vaccinated, have recovered from the virus or test negative.

The protests against the mandatory pass and other epidemiological restrictions have been happening as Croatia records a spike in COVID-19 infections and virus-related deaths. Public broadcaster HRT reported on Tuesday that there were 4,926 new infections and 73 deaths over the previous 24 hours.

The largest protest took place on Saturday when a rally attracted an estimated 15,000 to 20,000 people from all over Croatia.

The protest in the capital's main Ban Jelacic Square, where some...