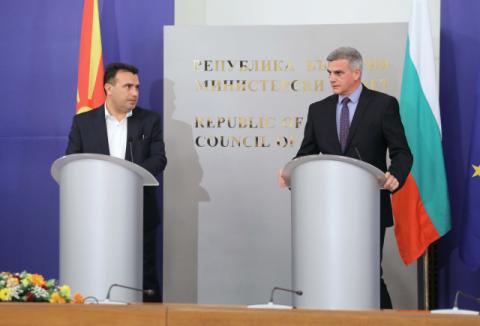 Today is a strange day. A day marked by two serious tragedies - last night's incident in the Varna village of Royak, where nine Bulgarian citizens died. The tragedy is still being investigated. Investigative bodies must do their job. A few hours later, a new tragedy marked today.

With these words, the caretaker Prime Minister Stefan Yanev began his speech during a joint briefing in the Council of Ministers with his counterpart from RN Macedonia Zoran Zaev, a BGNES reporter noted.

Tragedies are common, tragedies are what make us human and empathetic, no matter what nationality the people who are no longer among us are. The only thing we can do is express our condolences. At the same time, the Bulgarian state, in all its forms - in terms of safety and investigation of such incidents, is working quickly and is still in place, said Yanev after the tragedy on the Struma highway, in which a Macedonian bus crashed and caught fire. . The tragedy claimed the lives of dozens of RNM citizens, including children.

Zoran Zaev said the victims were 46, including 11 children. So far, the information was about 45 victims.

We are in coordination with Prime Minister Zaev. The Bulgarian and the authorities of RN Macedonia have coordination by sectors - foreign affairs, internal affairs, healthcare. The representatives of the prosecutors' offices of the two countries are also working, Stefan Yanev stressed and assured that coordination has been established at all levels.

The Bulgarian government is about to announce a day of mourning in memory of the victims, said Stefan Yanev.

Mitsotakis: No stepping back from construction of border fence

Day 326 of the Invasion of Ukraine: Russians Kill 20 People, a Child among them, More under the Ruins in Dnipro

Bulgaria: An Independent International Auditor will Investigate in Detail the Activities of NEXO

Plane Crash in Nepal: 72 People On Board including 15 Foreigners

Bulgaria: Over a Million Covid Vaccines will Expire by June 2023

Egg Producers in Bulgaria expect their Price to Continue to Rise

Day 325 of the Invasion of Ukraine: Powerful Explosions in Kyiv this Morning

Fandakova will Not Run for Re-Election as Mayor of Sofia

Fines from 1,000 to 26,000 Euros for Traders in Croatia who unjustifiably Increased Prices after Adopting the Euro