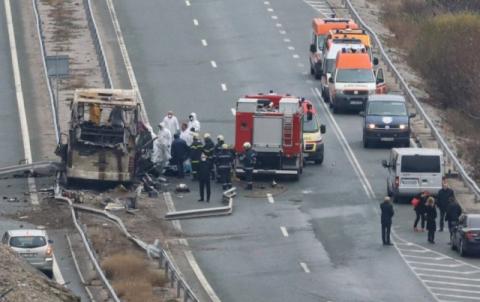 A sudden malfunction or driver error are the two leading versions of the investigators of the severe accident. It is clear from the inspection that the bus first deviated and hit the right side of the road and an explosion was heard.

What we know so far: 4 buses with Macedonian registration have entered our country through "Kapitan Andreevo" border checkpoint. They traveled to Skopje. Three of the buses were 15-20 minutes ahead of the bus that crashed.

It is not yet possible to say what caused the crash.

Investigators are working on two main versions - a sudden technical malfunction of the bus, which includes the possibility of a flat front right tire or a mistake of the driver, who may have felt sick or fallen asleep. It is noticeable that there is no braking distance.

The bus was mostly used by young people who lived abroad and returned to the Republic of North Macedonia after a long weekend. This is what the tour guide Denis Khalidov, who met with the group on Sunday in Istanbul, told media. The company that owns the bus is one of the largest tour operators in our southwestern neighbor, he added.

"They have good buses, so I think it should have beem technically sound. But it's one thing to observe it, it's another to pass a technical inspection. It's...