Zaev: Terrible tragedy, Most of Victims are Young People who were Probably Returning from a Trip 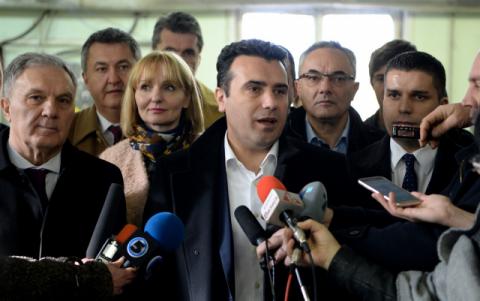 The Prime Minister of the Republic of North Macedonia, Zoran Zaev, who is on his way to Sofia, told MIA that he had talked to one of the survivors of the terrible accident on the Struma highway, who informed him that he had heard a loud explosion.

"I am in contact with Bulgarian Prime Minister Stefan Yanev, who has already visited the people. I had the opportunity to talk to one of the survivors. He explained that people were sleeping on the bus when a loud explosion was heard. They managed to break one of the windows and saved several passengers. Unfortunately, the others did not succeed, it is a terrible tragedy, because most of them are children - 12 children under the age of 18, and the others are young people aged 20-30. Most of them are our citizens, but there are also Serbian national," Zaev told MIA.

The Minister of Foreign Affairs of the Republic of North Macedonia, Bujar Osmani, arrived in "Pirogov" Hospital to see the victims who survived the crash on the Struma highway

He said in response to a question that, as far as he knew, the travel agency was from Skopje, and according to unconfirmed information, there were more than 10 children among those killed in the crash.

Four People have been Accused in the Nexo Case, Witnesses have requested Protection

Eurobarometer: 96% of Bulgarians are Worried about the Rising Cost of Living

Crypto Platform Nexo complained that they were Not Given a Search Warrant for Hours: They will Sue Bulgaria

Russian Politician demanded the Assassination of the German Foreign Minister

Four People have been Accused in the Nexo Case, Witnesses have requested Protection

NATO to Deploy AWACS Aircraft from Germany to Romania

The Kremlin declared Victory in Soledar