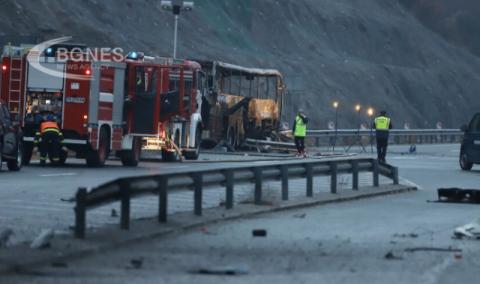 Yesterday's bus crash in Bulgaria, which killed at least 46 people, is the worst bus crash in Europe in a decade. This is how Agence France-Presse (AFP) commented on the tragedy that happened early morning yesterday on the territory of Bulgaria with a bus with Macedonian registration.

Commenting on the tragic details of the incident, the agency is looking at the continent's biggest bus tragedies in the last 10 years.

At least 46 people, including 12 minors, died when a bus traveling from Istanbul to the northern Macedonian capital, Skopje, burst into flames in Bulgaria early this morning. Most of the passengers are from the Albanian minority in the RNM.

According to official data, in 2019 in the country with a population of 6.9 million people a total of 628 people died in road accidents, and in 2020 - 463 people. Road accidents are often due to poor road conditions, obsolete cars and speeding.

Today's accident took place on a section of highway with steep slopes and no clear demarcation lines, where many accidents have occurred in the past, according to Diana Rusinova of a road safety NGO that has complained to authorities in the past.

Portugal: 29 German tourists were killed when their bus veered off the road to a restaurant on the mountainous island of Madeira on April 18th.

Russia: A bus fell from a bridge into a frozen river in Siberia on December 1, killing 19 people.

Turkey: 17 migrants smuggled through Turkey were killed and 36 were injured when their bus burst into flames after hitting a pole on March 29 near Kars in the...