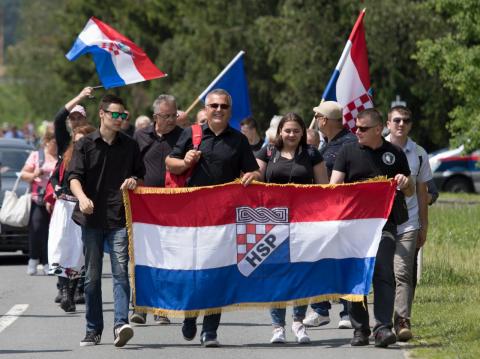 An Austrian Interior Ministry group of experts presented a report to officials on Wednesday suggesting a complete ban on the annual gathering in Bleiburg in southern Austria which commemorates tens of thousands of Croatian Nazi-allied Ustasa troops and civilians who were killed by the Yugoslav Partisans in 1945.

The report says that "gatherings in the form and nature as they used to take place over the last decade, will be prohibited in the future".

"This implies that the commemorative events, which had been organised by the association Pocasni Bleiburski vod - Bleiburger Ehrenzug [Honorary Bleiburg Platoon] on a yearly basis in mid-May will no longer take place," it adds.

The annual event at Loibacher Field near Bleiburg has been accused of being a gathering point for Croat nationalist extremists because some participants display symbols of the Nazi-allied Ustasa movement, which killed Jews, Serbs, Roma people and others during World War II under the rule of the Independent State of Croatia, NDH.

The Interior Ministry expert group's report says that the Bleiburg commemorations violate the country's obligations under the Austrian State Treaty which re-established its independence in 1955. The treaty prohibits Nazi and fascist organisations.

The group's report also proposes the banning of symbols of the Croatian Defence Forces, HOS. The coat or arms of the HOS, which was the armed force of the right-wing Croatian Party of Rights during the 1990s Yugoslav wars, includes an Ustasa slogan.

Interior Minister Karl Nehammer will give the report to the government on Wednesday, and then it will be presented to the Austrian National Council, the lower house of the country's parliament, for further consideration.