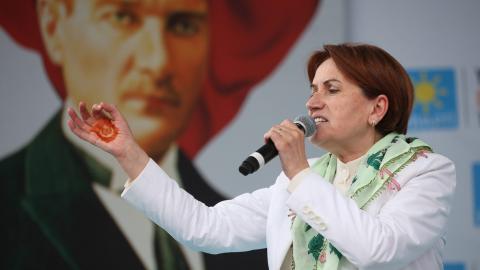 Meral Aksener, the leader of the 'Good Party' (IYI) speaks in front of the picture of Mustafa Kemal Ataturk, founder of modern Turkey, in Kocaeli, 19 June 2018. Photo: EPA-EFE/ERDEM SAHIN

"It is shameful to bear the government's lies even for one more day. It is enough. The [ruling Justice and Development Party] AKP is a burden on this country's shoulders," Aksener added.

Several spontaneous protests were organised on Tuesday night in Istanbul, Ankara, Izmir, Kocaeli and other cities after the lira went into freefall against foreign currencies.

From windows and balconies, locals also supported people who marched in the streets, chanting for the resignation of President Recep Tayyip Erdogan's government.

Police immediately intervened and a few dozen people were detained, including journalists and politicians. Police also blocked and barricaded squares and streets in Istanbul's Taksim and Kadikoy neighbourhoods as a preparation against larger protests.

Turkey's lira recorded a sudden 15-per-cent fall in value against the US dollar on Tuesday, its second-worst daily performance ever, after President Erdogan defended recent sharp rate cuts, and vowed to win his "economic war of independence" despite widespread criticism and demands to reverse course.

The lira has lost 45 per cent of its value this year, including a 26-per-cent sharp decline since last week.

Erdogan has pressurized the Central Bank to decrease interest rates aiming, he says, to boost...