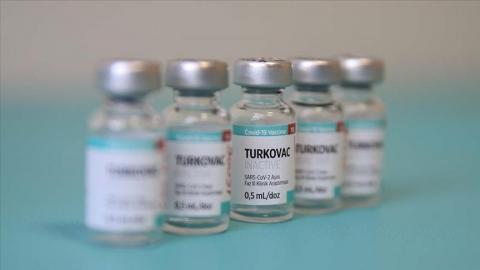 The emergency authorization application for the domestically developed COVID-19 vaccine, Turkovac, has been submitted to the Turkish Medicines and Medical Devices Agency (TİTCK), Health Minister Fahrettin Koca has announced.

"I would like to share a piece of good news to our citizens: Our domestic inactive COVID-19 vaccine Turkovac has applied for emergency authorization as of today," Koca said during a meeting at the Turkish parliament.

The minister also noted that every stage of Turkovac, from cell to vaccine, was developed in Turkey and by Turkish scientists, adding he hoped the shot would be available for use by the end of this year.

Locally-made Turkovac was developed by a team of scientists in cooperation with the Presidency of Turkish Health Institutes (TÜSEB) and Kayseri Erciyes University, and its phase 3 human trials started in June.

Kluge thanked the Turkish authorities for their contribution.

Responding to Kluge's tweet, Koca said Turkey would donate a further 10 million doses of COVID-19 vaccines via the COVAX facility, an initiative meant to deliver vaccines to low- and middle-income countries.

Earlier, Koca said that new treatment methods would now be put into use to control the pandemic.

Speaking after a meeting of the country's Coronavirus Scientific Advisory Board, Koca stressed that the use of Favipiravir would be terminated and that the physician of a person may decide on the indication for use in the...