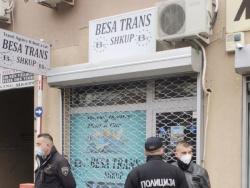 The two customs inspectors, who were on duty when the bus passed, were fired. Their immediate superior will also be sanctioned. The severe accident killed 45 people and injured others.

An inspection carried out by the Inspectorate of the Customs Agency in Skopje established that "the bus with registration number SK 0284 BA, owned by Besa Trans, was not registered when leaving the country on November 18, 2021. "The customs officers from the Deve Bair border checkpoint (Gueshevo from the Bulgarian side) have checked only the list of the names of the passengers," the RNM Customs Agency said in a statement.

They specify that the same bus in the period from October 15 to November 11 this year has repeatedly crossed the border with Bulgaria, Kosovo and Albania.

The Macedonian Ministry of Transport and Communications has already revoked the license of "Besa Trans" because the crashed bus does not exist in the electronic register for issued licenses.

"Besa Trans" has four licensed cars of "Beca Trans BTB", but not for the crashed bus, stressed the Ministry of Transport and Communications.

Besa Trans last night denied the information that smuggled fuel and pyrotechnics were being transported in the crashed bus.

Macedonian Interior Minister Oliver Spasovski said "according to his information, there were no fuel tubes...