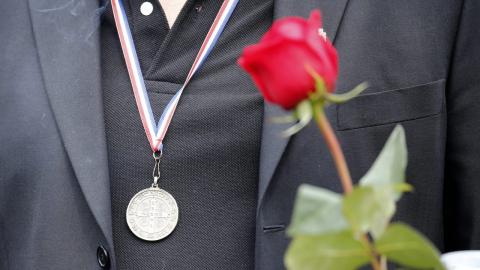 The Croatian parliamentary committee for war veterans' affairs endorsed a proposal on Tuesday to establish a military graveyard in the central Mirogoj cemetery in Zagreb for soldiers who fought for the 1941-45 Independent State of Croatia, NDH, a Nazi-backed puppet state.

The soldiers of the World War II fascist Ustasa and Home Guard forces should be described in the new memorial graveyard as members of "the Croatian army", the committee suggested.

The committee said that "every man is entitled to a civilised and dignified burial and a marked grave", adding that both the War Veterans' Ministry and the former mayor of Zagreb, Milan Bandic, had agreed to the graveyard.

Around 550 soldiers who were part of Ustasa forces are buried at the Mirogoj cemetery, where there is also .

But the proposal to describe the soldiers as Croatian army troops was described as "completely unacceptable" by Katarina Peovic of the Workers' Front party, who is also a member of the parliamentary committee for war veterans' affairs. Peovic's own proposal to condemn this was rejected by the committee, however.

The Alliance of Anti-Fascist Fighters and Anti-Fascists of Croatia, SABA said it strongly opposed plans to established the memorial graveyard.

"One must not under any terms accept that the Ustasa were 'a Croatian army'," SABA's president Franjo Habulin told a news conference on Tuesday.