Human Error is the Leading Version of the Tragedy on the “Struma” Highway, Victims are 44 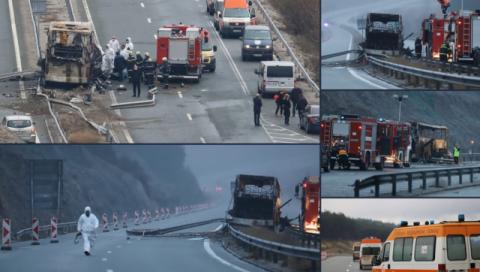 Human error is the leading version of the Struma highway accident. This was stated at a briefing by Deputy Chief Prosecutor Borislav Sarafov, who was also informed that the victims were 44, not 45.

The version of a terrorist act is excluded.

According to a survivor of the accident on the Struma highway, 8 people were rescued, not 7. This was told to investigators by one of the victims accommodated in Pirogov, who helped the other survivors to get off the burning bus.

The surviving young man first told this in a personal meeting with the spokesperson of the Chief Prosecutor Siika Mileva in "Pirogov", after which he repeated his story to the investigators. However, there are 7 patients in the hospital and that is why it is yet to be established whether there are eight survivors, as such information the Macedonian media.

In addition to the young man, another of the wounded also testified. They gave a one-way testimony, and others are expected to be questioned.

Another discrepancy arose during the press conference - not 45, but 44 victims of the accident - so many burnt bodies were found and it remains to be seen whether there was any transfer or disembarkation of passengers. The lists will be compared with the other three buses that also traveled on this route.

The main version that investigators and prosecutors are working on: So far it is clear that the driver deviated on the road to the right, strung on the guardrail, this caused the sparks and then the fire. The guardrail also was blocking the back door of the bus, which prevented people from leaving.

In addition to human error, investigators...