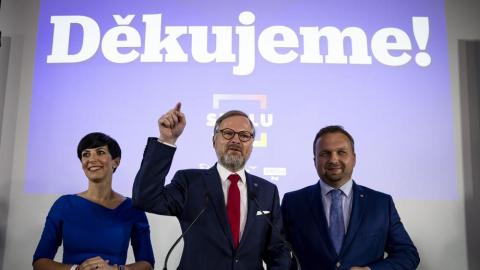 The president is still to appoint the other 17 ministerial nominees. That's meant to be a formality, but Zeman is a master of turning such formalities into political drama.

The president has told the country that he plans to object to one ministerial nomination. While he didn't name anybody, the proposal of Jan Lipavsky as foreign minister is widely assumed to be the target.

The Pirate Party MP is a staunch critic of the links to Russia and China that Zeman has worked so hard to cultivate. But at the same time, the head of state, who has no official power to demand any changes in the composition of the government, wants to see how far he can push Fiala.

"Zeman prepared the ground and decided to go into dispute. He is testing the position of the future prime minister," political journalist Marie Bastlova told Czech Radio.

Fiala has pledged not to change any name on the list. And Democratic Bloc MPs have called for pushing back against the incorrigible president, in the guise of cutting the budget of the presidential office or even a constitutional complaint against Zeman's violations.

For the moment, Fiala has remained calm. But he's well aware that Zeman and his circle have spent years stretching the spirit of the constitution to cause mischief and raise Prague Castle's sway over the nation's political life.

Blocking ministerial appointments is a favoured ploy. The president twice sparked chaos during the term of the outgoing minority government led by Andrej Babis by refusing to appoint nominated ministers.

These episodes illustrated Zeman's leverage over the billionaire and his weak government. But with the 2017 power pact with Babis now of little use, the presidential administration needs to find a way to get its...