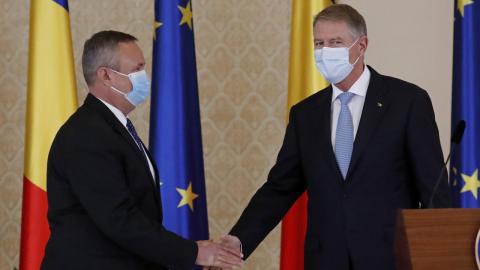 Romania's parliament swore in a government led by new Prime Minister Nicolae Ciuca on Thursday, with 318 votes out of 466.

The new majority comprises the National Liberal Party, PNL, the Social Democratic Party, PSD, and the Democratic Union of Hungarians in Romania, UDMR.

"We will do everything possible to have the citizen in the centre of attention. So, thank you once again; please allow us to go and get to work," Ciuca said after the vote in the legislature.

After the vote, the new cabinet went to the Cotroceni Palace and took the oath before President Klaus Iohannis.

Iohannis told the new government that if the political crisis is over, other crises are not, and people were getting tired.

"Romanians are waiting for you to start and solve the problems you stated in the governing program. The people are tired of crises. The citizens are tired of promises and want to see results. Therefore, I invite you to deliver them," said the President.

The new government was invested after a political crisis lasting almost three months. First, the former liberal PM Florin Citu dismissed the Save Romania Union, USR, former Justice minister Stelian Ion, the former ally of PNL. Following this, the government fell after a censure motion promoted by the USR and PSD.

Two prime ministerial nominees followed, but neither had the necessary support in parliament to take office.

After today's vote, USR leader Dacian Ciolos, said that some PNL members "threw themselves into the arms of PSD … I was at PNL headquarters when I was...