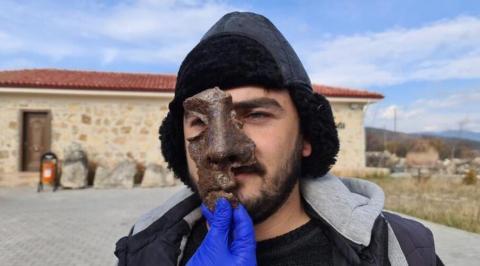 An 1800-year-old iron mask belonging to a Roman soldier has surfaced during the ongoing archaeological works in the ancient city of Hadrianaupolis in the Eskipazar district of the northern province of Karabük.

The excavations started in 2003 in the ancient city of Hadrianaupolis, which is 3 kilometers east of Eskipazar district, and now continue under the chairmanship of Ersin Çelikbaş from Karabük University's Archaeology Department.

The ancient city of Hadrianaupolis is estimated to have been founded in the first century B.C. in the village of Eskipazar Budaklar and served as a settlement until the eighth century.

"We continued the excavation of what we call a square planned structure for six months. Although we cannot identify the function of this structure, we have obtained some information to make some predictions. It indicates that this square building was a military building. We also found small pieces, such as the iron mask. The iron mask was an accessory worn by Roman cavalrymen to protect their faces. It is from 1,800 years ago," Çelikbaş said.

Stating that the Roman soldiers probably set up a base in the area, Çelikbaş said: "The military presence of the Romans in this inner geography of the Western Black Sea was unknown. But it is most likely that the Roman Empire established a military base here in order to obtain a frontal defense area against all kinds of dangers from the east and the Black Sea. Therefore, we can say that Hadrianaupolis was one of the important defense cities of Rome."