Turkey will not be defeated by currency sabotage: Bahçeli 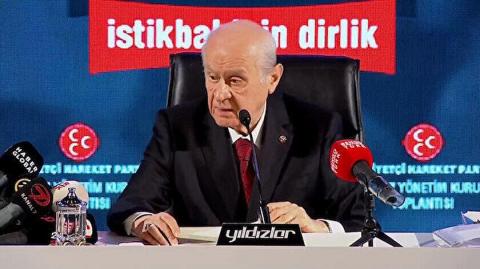 Turkey will not be defeated by currency sabotage or high inflation, the Nationalist Movement Party (MHP) leader has said, urging the opposition parties not to provoke the people for street protests on the pretext of economic conditions.

Turkey is one of the countries that survived the dire economic consequences of the COVID-19 pandemic and has continued to grow, Bahçeli stressed, blaming the foreign powers and their collaborators for the ongoing economic turbulence that depreciated the national currency in an unprecedented way.

"The [opposition] alliance, which has nothing to say other than early polls, has been mobilized with the support of the foreign powers against Turkey," Bahçeli said, accusing the CHP of moving together with the Peoples' Democracy Party (HDP) to this end.

He also urged the opposition not to provoke people to take to the streets for protesting the government, adding, "Democracy is not on the streets but in the elections. We will settle the accounts with all of them in the next elections that will take place in June 2023."