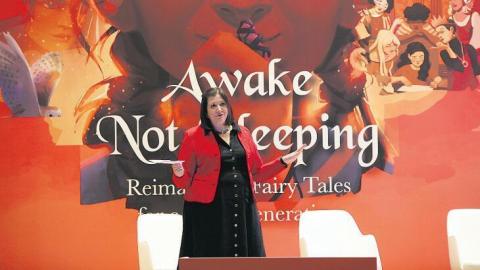 The U.N. Women Regional Office for Europe and Central Asia has launched its new creative writing initiative, which aims to change the way societies think of women's and girls' roles in public by rewriting 28 fairy tales in an event in Istanbul.

The initiative, introducing fairy tales created by 31 writers across Europe, was called "Awake Not Sleeping: Reimagining fairy tales for a new generation."

The event brought together feminist writers, celebrities, theatre performers, civil society representatives and children to discuss the role of fairy tales in challenging gender stereotypes and making gender equality a lived reality for all.

The event was held in a hybrid in-person and online format at the MEF International Schools in Istanbul, Turkey, and live-streamed on U.N. Women Europe and Central Asia Facebook Channels in English and Russian.

"U.N. Women leads action across the region to advance gender equality for girls and women, and for boys and men, in their minds, homes and communities," said Alia El-Yassir, U.N. Women Regional Director for Europe and Central Asia.

"We believe in the power of storytelling and hope that 'Awake Not Sleeping' will stir imaginations and stimulate children, young people, families and communities to talk about and take action against gender inequality," she added.

"If tales change, the world will be transformed," Elvan Tongal, the assistant general manager at MEF International Schools, said during her welcome remarks.

"When I was a child, we had six volumes of books of folk tales and fairy tales at home. I was so impressed with the stories that I would read them time and again during my childhood, always imagining what I would have done differently if I could become a character in the...