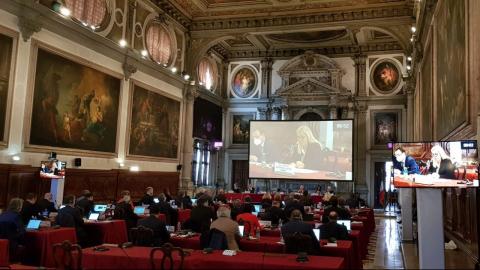 Serbia has followed "most" Venice Commission recommendations about its constitutional amendments - but the risk of politization of main judicial bodies still need to be reduced, the constitutional law advisory body of the Council of Europe said in its urgent opinion issued Wednesday.

"Even though the solutions proposed in the revised draft amendments in respect of these two recommendations do not go against any international standards as such, the Commission wishes to insist once again on the need to reduce the risks of politicisation of the two Councils," the opinion noted.

Serbian justice minister Maja Popovic said she was satisfied with his country's compliance. "The Venice Commission notes that most of the key recommendations of the October opinion have been adopted, in particular the recommendations concerning the composition of the High Judicial Council, which they particularly welcome," she said.

"With this urgent opinion, the Venice Commission removes any possible doubt, if it existed at all, that the Republic of Serbia received a positive opinion back in October", Popovic added.

The Venice Commission issued an opinion about Serbia's draft constitutional amendments in mid-October.