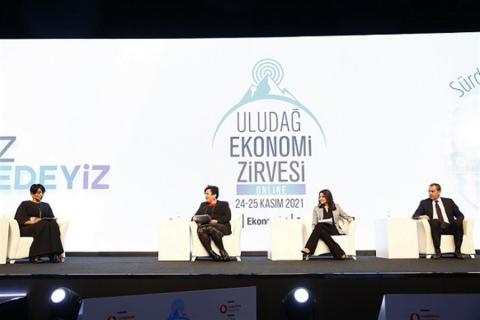 New production and business models that emphasize innovation and sustainability were discussed at the "Circular Economy: Don't Waste the Future" session on the second day of the Uludağ Economy Summit.

"As humans, we are far from the circular economy both in the world and in Turkey. 270 kilograms of garbage is produced per person per year in the world. This figure is 538 kilograms per person in OECD countries, and 420 kg in Turkey. When we look at the world regarding recycling, we can see that a recycling rate of 20 percent, 25-30 percent in the OECD, and only 12 percent in Turkey is achieved," Bilge said.

"We continue to bury 88 percent of all our waste in the ground in Turkey. We both harm nature and waste raw materials that can be reused in a resource-scarce world," he added.
"We waste a third of the food we produce, it costs about a trillion dollars. If this were a country, it would be the third most carbon-producing country after China and the United States," Butterworth said.

On his part, Grede said: "If we didn't waste food, we would have enough food for everyone in the world. COVID-19 has accelerated this trend. We received the Nobel Prize last year for our work on the battlefields for food security. War zones are the places where we help the most and have the most food security. The number of people needing food increase every year. It would be great if companies could help us more. Hundreds of shiploads of food...