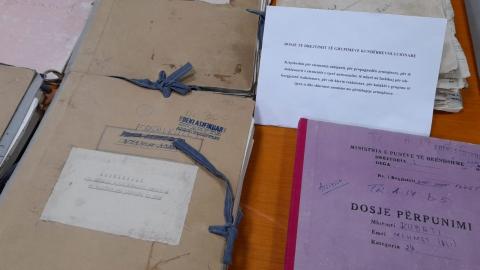 Aferdita Dalliu was a child when her grandfather, Hafiz Ibrahim Dalliu, a Muslim scholar with a strong reputation for patriotism, was imprisoned by the Communist regime that ruled Albania with iron fist for more than 45 years until 1991.

"He was imprisoned and tortured. He died in 1952. However, we as a family were persecuted up until 1991," Dalliu told BIRN while visiting an exhibition of declassified documents from the Sigurimi secret police in Tirana last week.

The documents show how families with an influence in their communities were kept under surveillance and regularly prosecuted because they were seen as a threat to Enver Hoxha's repressive regime.

"I was denied the right to go to university," said Dalliu. Instead, she was sent a coal mine in the village of Valias, where she had to work for the next 25 years.

Children of families like Dalliu's were not allowed higher education by the Communist regime and were assigned to jobs in mines and other heavy industries. Refusal to accept invited further persecution.

Dalliu was telling her story to a panel of academics and state officials at a conference held on November 16 as part of the exhibition, 'Tirana Under the Eye of the Sigurimi', organised by the  Authority for Information on Former State Security Documents and a local NGO, the Tirana association.

Although more than 30 years have passed since the collapse of the Communist regime, it remains a difficult topic in Albania, and the history of what the country went through in those 45 years is still little investigated or discussed.

'Our suffering is denied'