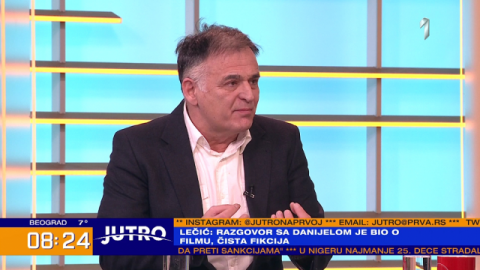 All theater plays that were part of the program of the 38th Theater Meetings in Brcko withdrew from the competition because Branislav Lecic is a member of the festival jury.
Although some theater plays were performed in the previous days out of respect for the audience, all the others gave up the competition part, and Danijela Stajnfeld called it a "heroic act".
Stajnfeld thanked her colleagues who withdrew their participation in the Regional Theater Meetings in Brcko for their solidarity. On the other hand, Branislav Lei is faced with the question of whether there is still room for him on the theater stages?
"My destiny in the theater is endangered. I am endangered, both in the media, and at my job, and at the faculty," Lecic told TV Prva.
He added that the question was never asked whether he would leave the jury, because the festival in Brcko ended last night with the showing of the play "Dervish and Death", and the jury performed its job.
"At the moment when I saw that this problem was moving with me outside of Serbia, I offered my resignation to the organizing committee and they refused, saying that they were too serious a festival for anyone from the outside or inside to change their statutory rules during the festival. They told me that if I resigned from the jury, I would bear the consequences because I have a contract signed with them," Lecic explained.
However, when asked how the playwright Almir Imirevi resigned from the jury and whether he would face the consequences, Lei said that "he certainly will".
"It is not a question of personal animosity," Lecic points out and adds that many of his colleagues have followed the trend of blaming someone with the help of the media.
"It is similar to the medieval witch...