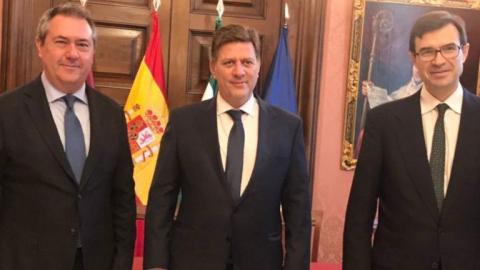 It was the first bilateral ministerial-level meeting since the 17 December agreement was signed.

«Greece did not see in a positive way the approach between the Spanish & Turkish side. It is necessary for us to remind Turkey of the decisions of the European Council & to emphasize the need to respect international law,» Varvitsiotis said in a tweet.

"For us, it is necessary for our Turkish interlocutors to be reminded of the decisions of the European Council and to stress the need for respect for international in resolving bilateral differences, and to respect the decisions of the UN Security Council regarding Cyprus," Varvitsiotis said after today's meeting.

In a statement, Varvitsiotis said that he told Barba, "Greece is a country that believes that in order to solve bilateral problems one must invoke international law, respect good neighbourly relations, and naturally avoid provocative, unilateral actions."

"This is not the case with Turkey…Greece did not view positively the coming together of the Spanish and Turkish side last week," he said.

The day after the agreement, Greek government spokesman Yannis Economou lambasted Spain over its move.

Commenting on Sanchez's talks with Erdogan in Ankara and an agreement for Turkey to purchase a large aircraft carrier from Spain, Economou at a press briefing made clear the intense annoyance...