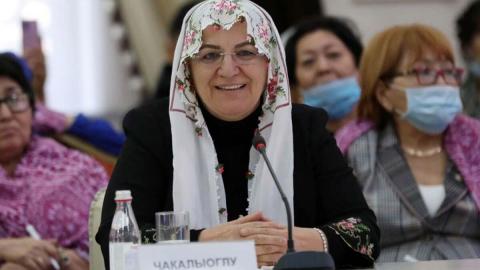 A woman who made her village famous countrywide with special tomato paste and tarhana soup in the northwestern province of Bursa has been invited to international symposiums in Kazakhstan to share her experiences with young female entrepreneurs.

"A woman can succeed in anything she wants," Sermin Cakalıoğlu said in her speeches to Kazakh women in five meetings in three cities.

The primary school graduate mother of four changed her village Saitabat's fate in 2002. A TV series at the time had made neighboring Cumalıkızık Village famous nationwide. Getting inspired by this, Cakalıoğlu united all the women around to make her village known for "cuisine."

First, she established Turkey's first village women's solidarity association, then she, with other villagers, started making tomato pastes and tarhana soup. In a short time, their products started to be sold nationwide.

She also opened a restaurant in the village where local tourists flock. It did not take much time for her to open two more branches in Bursa and the capital Ankara.

Today she is the head of the 113-membered association, where some 60 women are employed.

"It is not only me who made it; it was us. It's the team's success," Cakalıoğlu said.

If there is someone to applaud for, it is the "women of her village," she added.

When asked what she told Kazakh women, she noted, "I want to be a role model for all the women who sit at home, saying 'I have no education and job.' I did it; we did it."

Stating that "her village women's voice has been heard from Europe," Cakalıoğlu highlighted that she gets symposium invitations from time to time from different countries.