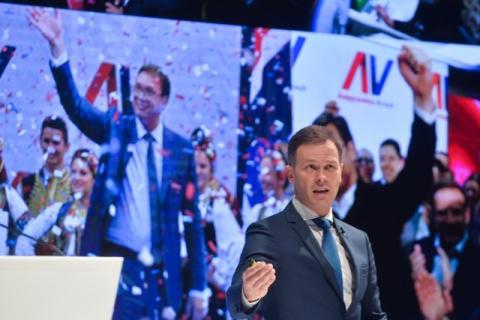 On that occasion, Sinia Mali presented the economic policy of the Serbian Progressive Party.
"You cannot successfully pursue politics if you have nothing to do. When we talk about the economic policy of the SNS and the economic successes of Serbia, we are talking about the dreams of one man, Aleksandar Vucic, who had a dream of making a ruined Serbia an economic leader in the region and to rapidly raise the living standards of Serbian citizens and maintain macroeconomic and financial stability", Mali said.
Mali said that the authorities left the destroyed state in 2012, and that they did not even have the money to pay pensions, along with high inflation, hundreds of factories that were closed, in one word, "bankruptcy".
He added that they were not afraid of challenges and that they brought urgent measures of fiscal consolidation, stabilized the exchange rate and inflation, and started something that was the basis for further growth of our economy.

Minister of Finance announced that from next year, the minimum salary will be over 300 euros, and he added that Serbia is growing, despite all the challenges.
Mali emphasized that we have stable, strong public finances, and pointed out that we have almost three billion euros in the account. "Ten years ago, we lagged behind the countries in the region, and today we are competing with the most successful countries in Europe. Serbia has become the dominant economic power in the region." Mali also spoke about the infrastructure and works that were once unthinkable, but also about the factories that were opened, which bring new jobs, and higher salaries for the citizens of Serbia.
"We had big dreams and Vui...