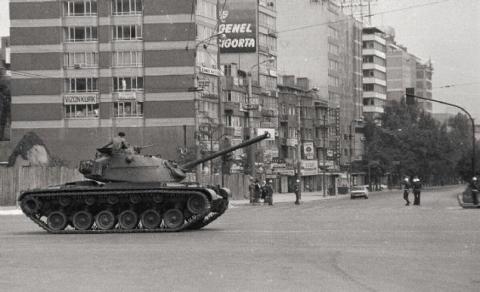 Turkey will pay compensation to a total of 370 people who are the victims or heirs of the 1960 coup.

A commission that was established to evaluate the applications to be made with the request of compensation for the damages of those who were harmed in the 1960 military coup has completed its works.

Speaking at a press conference, Deputy Justice Minister and Commission President Zekeriya Birkan recalled that the applications to the body started in February and ended in May 2021.

He emphasized that a total of 3,052 applications were made, including the statement that they had been harmed because of the investigations and prosecutions carried out against them following the 1960 military coup.

"I hope that the decisions of the commission, whose aim is to alleviate these sufferings even a little bit spiritually, will be beneficial," Birkan said, stressing that it is not possible to change the past and bring back the lost.

In 1960, a group of low-ranking officers instigated a coup to topple the Menderes government, which had been in power since 1950.