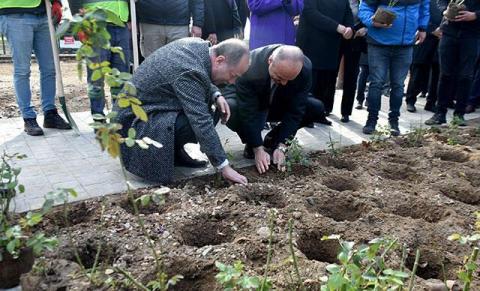 Officials in the northwestern province of Edirne have planted saplings of "Edirne rose," a local rose species that got lost over time, that they brought from a Bulgarian village in its own habitat, reviving the species once again.

"Edirne rose has reunited with the lands it once was born in," said Recep Gürkan, the mayor of the province, during a ceremony on Nov. 25.

Dating back to the 16th century, Edirne was once known for its "rose fields." Evliya Çelebi, a 17th-century explorer who traveled through the territories of the Ottoman Empire for 40 years, recorded Edirne as the "rose oil center" in his travelogue called "Seyahatname," which means "Book of Travel."

In the 17th century, a Turkish merchant took "Edirne rose" saplings to Bulgaria and established rose fields in the Kızanlık Village, where a facility produced rosewater for two centuries.

After the Ottoman-Russian War, many Turks left Bulgaria with rose seedlings, came to today's Turkey and formed rose fields in the provinces of Bursa, İzmir, Isparta and Burdur.

During this period, it is unknown why the tradition of planting rose in Edirne vanished.

"We are happy to add Edirne rose to our plant fauna and create awareness," Gürkan said after planting the rose saplings at the 99th Year Rose Garden on Nov. 25.

"I am sure that these roses will make the air of the province smell nicer," he added.