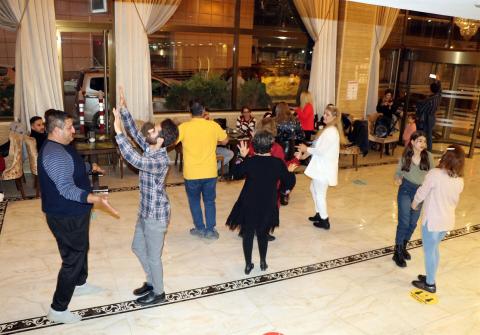 Thousands of Iranians have flocked to the eastern province of Van to benefit from discounts amid the Black Friday shopping days that started on Nov. 26 and will last until the weekend.

Causing a "Black Friday crowd" at the Kapıköy Customs Gate in the province's Saray district, many Iranians filled shopping centers and shops in the city.

According to officials, some 3,500 Iranians passed the border in their vehicles on Nov. 25 alone. Normally, around 800 people enter and exit both countries daily.

Surveillance footage showed Iranians "nearly crawling over each other while waiting for their passport control."

While talking to the Turkish media, an Iranian tourist said he was thrilled to be in Van. "I am here for two days. I am shopping and benefiting from discounts," he added.

According to local officials, Iranians filled all hotels in the province. "The occupancy rate of hotels is around 100 percent," an official said.

The business owners in the province are extremely happy about the Iranian tourists' influx.

"If they cannot find places at hotels, we can lodge them at our houses," a business owner said while laughing.

Turkey opened the gate a year later on May 9, but due to the rise of COVID-19 cases on the Iranian side, the gate could be fully opened on Oct. 9, triggering Iranian tourists entries.