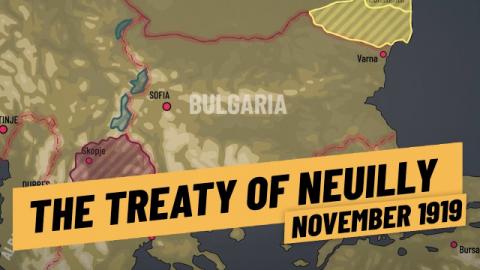 Today marks 102 years since the signing of the Neuilly Dictate, or since we were "defeated without being beaten."

The Treaty of Neuilly was signed on November 27 in the Paris suburb of Neuilly by Bulgarian Prime Minister Alexander Stamboliiski, and on the part of the victorious powers by the heads of their delegations to the Paris Peace Conference (1919-1920).

According to the treaty, Bulgaria is burdened with heavy reparation obligations amounting to 2,250,000 gold francs, which should be paid within 37 years after its entry into force with 2% interest on the total amount for the first and 5% for subsequent years. In addition, Bulgaria is obliged to hand over to its neighbors (allies of the victorious treaty forces) - the Serbo-Croatian-Slovenian Kingdom (since 1929 Yugoslavia), Romania and Greece, a certain number of cattle and 250,000 tons of coal.

In addition, Bulgaria lost Western Thrace, which was initially given for control by the Western treaty states themselves, which in turn gave it to Greece in 1920. Southern Dobrudja is taken from Bulgaria, and re-included in the territory of Romania, as well as the town of Strumica and its surroundings, together with the so-called Western outskirts (including the lands of part of Tsaribrod, Bosilegrad, Tran and Kula districts), which are granted to Yugoslavia.

In this way, our country is deprived of significant territories inhabited by a compact Bulgarian population. Again, under the Neuilly Peace Treaty, Bulgaria was deprived of the right to have its own conscript army, and in its place it was allowed to recruit a paid army of 33,000 soldiers and officers to guard its borders and maintain internal order.  As an integral part of the treaty, at Greece's request,...

Croatia’s Vukovar After the Fall: Despatches from the Ruins