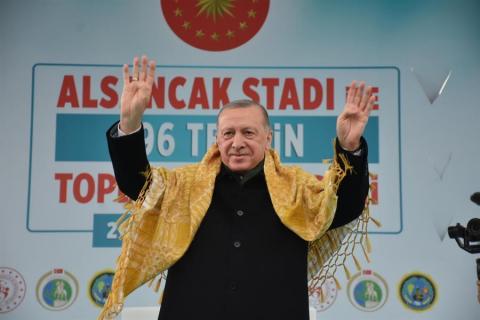 Turkey would never be deterred from its production-, employment- and current account balance-oriented economic program, President Recep Tayyip Erdoğan has said on Nov. 26, addressing to citizens in the western province of İzmir.

"The submissiveness of those who see high interest rates, inflation and the foreign exchange traps as our country's fate is called learned helplessness. We have overcome this learned helplessness syndrome and elevated our country to the highest league in many areas extending from defense industry to healthcare, and we will achieve the same in economic policies as well" Erdoğan has noted.

Noting that Turkey abandoned the IMF prescriptions, employed as the primary tool of tutelage over developing countries, as soon as the AKP came to power, President Erdoğan said: "We had started to build the infrastructure of our own program for development and economy instead of the IMF prescriptions, which doomed the people to poverty, famine and unemployment and ended in failure wherever they were applied. Behind every step we take, every investment we make, and every work we launch in our country lies the goal of elevating Turkey to a position where it can continue down its path by its own economic means and capabilities. You must be remembering that we couldn't get a break from troubles since the moment we announced that we would pay off our $23.5 billion debt to the IMF and would never again renew the agreement with it. We say that the world is bigger than 5 in order to highlight the crookedness in the global security system; the same we say in economy, as well."

Stressing that Turkey objects to those, who hold the world to ransom through such organizations as the IMF and the World Bank, by saying that the world is bigger than 5,...