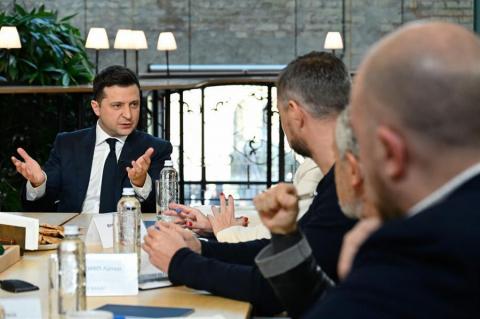 Ukrainian President Volodymyr Zelenskyy on Nov. 27 claimed that his country's intelligence service has uncovered plans for a Russia-backed coup d'etat in the country set for next week that allegedly involves one of Ukraine's richest oligarchs.

Both the oligarch and the Russian government rejected the allegations. In Nantucket, Massachusetts, where he is spending a holiday weekend, U.S. President Joe Biden expressed concern at the coup talk and renewed U.S. support for Ukraine's sovereignty and self-government.

At a news conference in Kyiv, the Ukrainian capital, Zelenskyy said he received information that a coup was being planned for next Wednesday or Thursday. He did not give many details to back up his allegation, but pointed to a suspected role of Ukraine's richest oligarch, Rinat Akhmetov.

The president said that Ukrainian intelligence has audio recordings of an alleged meeting between Russian and Ukrainian officials discussing a plan for a coup allegedly funded by Akhmetov, whose fortune is estimated at $7.5 billion.

Zelenskyy refused to disclose further details about the alleged coup, saying only that he doesn't plan to flee the country.

Kremlin spokesman Dmitry Peskov rejected the allegations in comments to journalists in Moscow on Friday.

"Russia had no plans to get involved," Peskov said. "Russia never does such things at all."

Akhmetov called Zelenskyy's allegations "an absolute lie." "I am outraged by the spread of this lie, no matter what the President's motives are," Akhmetov said in a statement, relayed to the Associated Press by his spokeswoman Anna Terekhova.