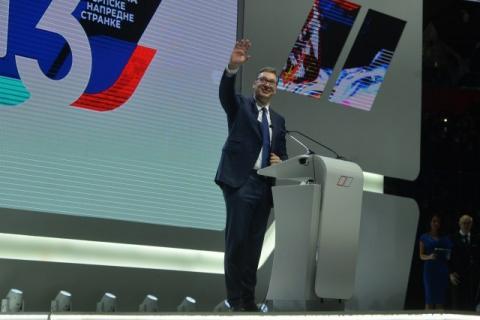 As a symbol of work, large infrastructure projects and investments, everything that has been done in Serbia since the SNS was the main pillar of the Serbian government, the Arena is adorned with the "Bagi Radia" excavator.
Thousands of members and supporters of the party gathered in the Arena, from Subotica to Strpce, and many citizens stayed in front of the hall, so they watched the ceremony through video beams.
Upon entering the Arena, President Aleksandar Vui was greeted with long-lasting applause and shouts of "Aco, the Serb", while a large banner with Vui's face, flag and coat of arms of Serbia was spread on the stands.
Arena is also decorated with large banners "Kosovo and Metohija with our President Aleksandar Vui", Skopje, Lebane, "Vojvodina is Serbia", "Vojvodina is with Vui". The gathering is attended by SNS members, but also guests from other parties, SPS leader Ivica Dacic and Socialist official Dusan Bajatovic, president of the Union of Vojvodina Hungarians Istvan Pastor, and there are also representatives of the Serbian List from Kosovo and Metohija, Goran Rakic and Igor Simic.
The ceremony began with the performance of the anthem "God of Justice", and then a short film was followed by a reminder of all the challenges that Serbia faced during the coronavirus epidemic, as well as investments in health care.

"While the SNS is in power, this country will pursue an independent policy" FOTO TANJUG/ ZORAN ZESTIC/ bs

President Aleksandar Vui thanked everyone who came, and especially those who did not manage to enter Arena.
"Ladies and gentlemen, dear friends, I want to apologize, because there are 25.000 people in front of the Arena, but there was no more room here." He said that today they showed what a decent...