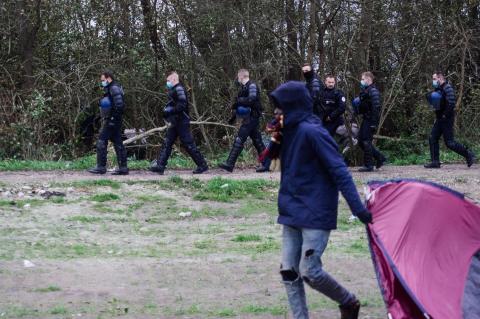 France hosts a meeting of European ministers on Nov. 28 to discuss ways to stop migrants crossing the Channel in dinghies, but without Britain, which has been excluded following a row last week.

Ministers responsible for immigration from France, Germany, the Netherlands and Belgium will meet in the northern French port of Calais on Sunday afternoon to discuss how to tackle people-smuggling gangs that provide boats to migrants seeking to cross the narrow waterway.

The talks were called following the shocking deaths of 27 people last Wednesday as they attempted to cross from France to England in a dinghy that began losing air while at sea in cold winter temperatures.

The aim of the meeting is "improving operational cooperation in the fight against people-smuggling because these are international networks which operate in different European countries," an aide to French Interior Minister Gerald Darmanin told AFP.

The main focus had been set to be talks between Darmanin and his British counterpart Priti Patel after both countries vowed in the immediate aftermath of the mass drownings to cooperate more.

But within 48 hours of the accident, French President Emmanuel Macron had accused British Prime Minister Boris Johnson of being "not serious" in unusually personal criticism that pushed relations to fresh lows.

France was irked by Johnson's initial reaction, which was seen as deflecting blame onto France, and then by his decision to write a letter to Macron which he published in full on his Twitter account before the French leader had received it.

Patel's invitation to Nov. 28's talks was promptly withdrawn over the breach of diplomatic protocol, with an aide to Darmanin calling Johnson's letter "unacceptable".