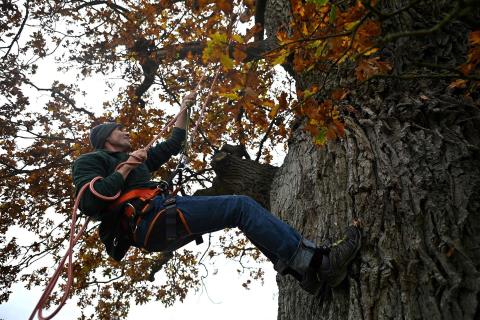 Hanging halfway up an ancient oak tree, peering into a small, dark hole in its enormous trunk abuzz with bees, Filipe Salbany can barely contain himself.

"Amazing - the queen's laying!" the 55-year-old shouts down, as he dangles around 15 meters (just under 50 feet) above the grounds of Blenheim Estate, secured by ropes and a harness.

"This is a real classroom. This is fantastic. Unbelievable!"

The South African conservationist has spent much of the last 18 months scouring for hives in the ancient woodlands of the estate, near Oxford, in south central England.

His unbridled enthusiasm stems from his belief that these are no ordinary bees.

He has identified them as a rare ecotype - a distinct form of a species, occupying a particular habitat - with a suspected centuries-old lineage in the self-contained corner of the Oxfordshire countryside.

DNA tests are now under way to confirm the finding, but the potential discovery of wild descendents of so-called native bees has Blenheim and beyond buzzing with excitement.

It was thought such populations had largely disappeared due to disease, pesticides and competition with foreign imports.

"If we can do this in more ancient woodland, different countries, if we can find local subspecies of bees... we can learn so much more about the environment and improve agricultural systems," he told AFP from his tree perch.

"Whether it's Romania, Bulgaria, France, we need to look at the species that are surviving and understand the factors that are affecting the bees, whether it's chemicals, pesticides, human intervention.

"We can stop mixing all the different lineages of bees and get fewer die...