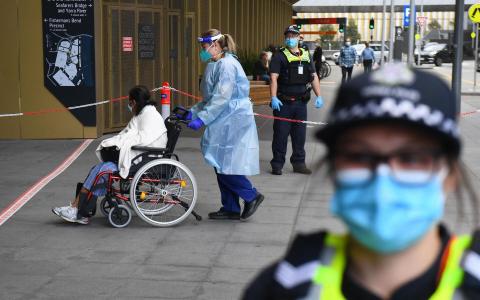 Australian officials were racing on Nov. 28 to conduct further tests on passengers arriving from southern Africa who tested positive for COVID-19 to determine if they were carrying the omicron variant as nations around the world tightened controls against the worrying new strain.

Neighboring New Zealand announced it was restricting travel from nine southern African countries because of the threat posed by the variant, and Japan widened its border controls to include more countries from the region.

Tourist-dependent Thailand, which only recently began loosening its tight border restrictions to leisure travelers from certain countries, announced a ban of its own on visitors from eight African counties. Similar restrictions took effect in the business hub of Singapore, which is barring entry and transit to anyone with a recent history of travel to seven southern African nations.

The tighter restrictions in the Asia-Pacific region echoed steps rapidly taken by countries around the world to limit the spread of the omicron variant just days after it was identified by researchers in South Africa. The act first, ask questions later approach reflected growing alarm about the emergence of a potentially more contagious variant nearly two years into a pandemic that has killed more than 5 million people, upended lives and disrupted economies across the globe.

While much remains to be learned about the new variant, researchers are concerned that it may be more resistant to the protection provided by vaccines and could mean that the pandemic lasts for longer than anticipated.

Cases involving the omicron variant have already been confirmed on multiple continents, with Germany, Italy, Belgium, Israel and Hong Kong all reporting cases in recent...