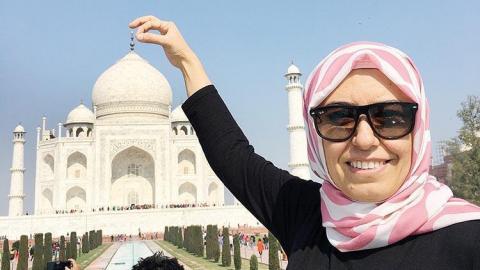 A new book by a Turkish academic features the hopeful stories of three women, respectively from Turkey, Canada and India.

Lotus Çiçekleri (Lotus Flowers) by Hatice Altunkaya includes details from her own story of the academic who grew up as an orphan, was forced into marriage at the age of 14, and is now working as an associate professor.

Since she did not continue her education after secondary school, she could only enroll in an open high school and finally earned the right to enter a university by scoring a high grade on the exam.

She did not stop when she lost her husband to cancer while she was studying at university. She had to go to the Central Anatolian province of Konya from the eastern province of Malatya for her master's education every week.

Appointed to India as a Turkish teacher after completing her doctorate, Altunkaya made observations during her stay and collected the stories of an Indian and Canadian woman, as well as herself, in a book.

"My aim is to serve all women of the world for a better world," she said, stressing that she wanted to say "you can" to women with her book.

"One must save herself first. If she can save himself, she can expand the circle starting from the closest, her children, and save everything she has touched," Altunkaya noted, noting that she had accomplished this.

Putin acknowledges: "You are a great power"