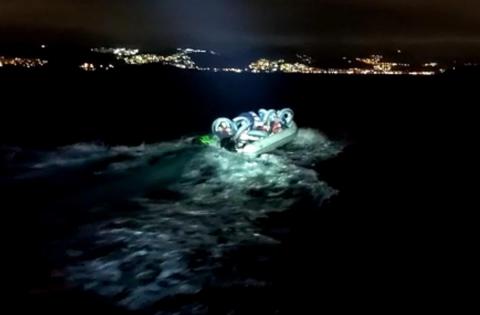 The Turkish Coast Guard has rescued nearly 100 irregular migrants in the Aegean Sea over the weekend.

Acting on the information that a group of irregular migrants were sailing in a boat off the coast of Karaada in the Çeşme district of the western province of İzmir, the Coast Guard launched an operation.

In a separate incident, 21 irregular migrants were rescued near the Dikili district after they sought help from officials.

Irregular migrants said they were stranded in the sea when the boat's engine failed.

The Coast Guard also rescued 48 migrants, including women and children, in a 17-meter-long fiber boat off the coast of the Cennet Island in the Marmaris district of the western province of Muğla.

The units from the Coast Guard acted after receiving information that a boat with people on board was drifting in the sea. Those irregular migrants, most of them from Syria, as well as Iraqis and Somalis and one person suspected of human trafficking were taken to the Coast Guard's boat.

The human trafficking suspect was said to receive 2,000 euros to take the migrants to Greece's Rhodes Island.

Also in Muğla's Bodrum district, eight irregular migrants, who were pushed back by Greek forces into the Turkish territorial waters, were rescued by the Coast Guard.

State primary deficit down by 4.6 billion euros compared to forecast