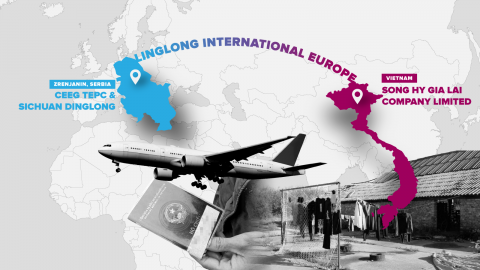 The house in Zrenjanin which Vietnamese workers are living. November 2021. Photo: A11/ Sara Nikolic

The Serbian government, which frequently courts foreign investors with generous subsidies and, in the case of Linglong, free land, says inspectors have found nothing wrong, describing the Linglong construction site as "the most monitored in Serbia."

Curcic said the government's inaction raised the question - "to what extent our country is involved in this chain of labour exploitation and potentially human trafficking?"

Kim, who spoke on condition his real name not be published, told BIRN: "We are very poor in Vietnam and we came here to earn money for our family. But the Chinese contractors have no respect for our work or our lives."

Construction on the Linglong factory began in 2019 as one of a number of Chinese projects in Serbia that has made the country a Balkan hub for Chinese investment. Linglong said it planned to invest 800 million euros in building the plant, which will employ 1,200 people and churn out 13 million tyres per year. Even the country's top football league was renamed the 'Linglong Superliga' after the tyremaker became its sponsor.

Linglong picked Serbia over a number of other countries in Central and Eastern European, lured by the promise of 95 hectares of land - valued at 7.6 million euros - free of charge and 75 million euros in subsidies from state coffers for the recruitment of the 1,200 employees by the end of 2024, according to Serbia's Commission for the Control of State Aid.