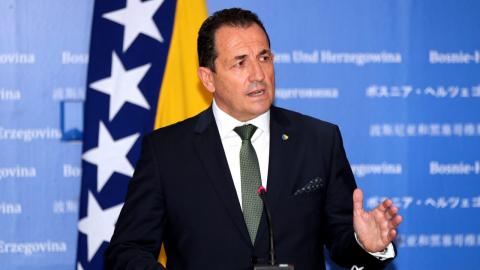 Former Bosnian defence minister Selmo Cikotic was charged on Monday with having abused his official position as defence minister from 2009 till 2011 by unlawfully favouring a buyer to the detriment of the ministry he led when planning the export and sale of surplus outdated weapons, ammunition and military equipment.

"Acting completely illegally and bypassing the legal procedures, not informing his deputies or the Bosnian Presidency, the defendant made changes to the contract, after which he exported weapons and ammunition of a higher quality and in demand on the market, instead of weapons and ammunition earmarked for write-off and sale for the purpose of reducing storage and maintenance costs, to the Scout d.o.o. Zagreb company," the Prosecution said.

"In which way, he caused damage to the budget of Bosnia and Herzegovina to the amount of around 9.7  million Bosnian marks (around 4.9 million euros) and obtained material gain worth several millions to others," it added.

In 2018, BIRN reported that Bosnia's Defence Ministry lost a court dispute worth 20 million marks, or around 10 million euros, initiated by a Croatian company because the weapons it had ordered in 2003 and 2004 were not delivered.

Under the indictment, as an official person of an executive authority of Bosnia and Herzegovina, Cikotic, currently Security Minister in the Bosnian government, caused major damage to the budget and obtained huge material gain for others, thus committing a serious crime.

The Prosecution will be examining a number of witnesses and experts and introducing several hundred documents as evidence. The indictment has been filed with the State Court for confirmation.