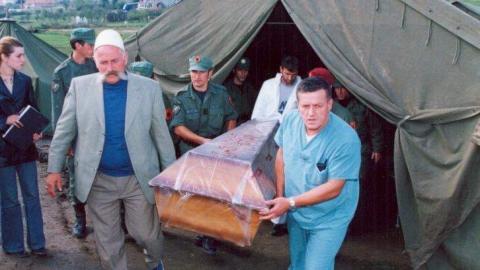 "The bodies had been thrown into the grave mercilessly and hurriedly. When I first touched the remains of a body, I shuddered with horror. It seemed to me that each of them was telling me his own history of his death. It was something surreal," Gerxhaliu told BIRN.

He and other forensics experts from Kosovo say that their job makes them feel a huge responsibility to those who were killed, but also puts a heavy psychological burden of pressure on them to find the victims on behalf of their families.

Before going to Batajnica, Gerxhaliu had exhumed the bodies of people who died in a wartime massacre in Izbica, a village in the central Kosovo municipality of Skenderaj/Srbica, where he discovered that one of them had been buried alive. "I thought that I wouldn't be faced with anything to shock me [in Serbia]. But Batajnica was something totally different [from Izbica]," he said.

After NATO's bombing raids began in March 1999, Yugoslav Army troops and Serbian police and paramilitaries went on a killing spree in Kosovo. To remove evidence of war crimes, lorry loads of bodies, some of which had already been buried once in Kosovo and then dug up again, were taken to locations in Serbia for secret reburials.

"When I took out the remains of a seven-year-old child, with them was a bag of clothes. The child's jacket sleeve fell off because it was rotten. As I bent down to get the sleeve, I thought I heard a voice say: 'Where have you been for so long?'" Gerxhaliu recalled.

"I was stunned. I started to cry. I felt anger, pain, hatred… Above all, I felt weak, like someone from a poor, weak country. Then a Serbian doctor told me: 'I'm sorry but we have to move on.'"

'War is not over for many people'