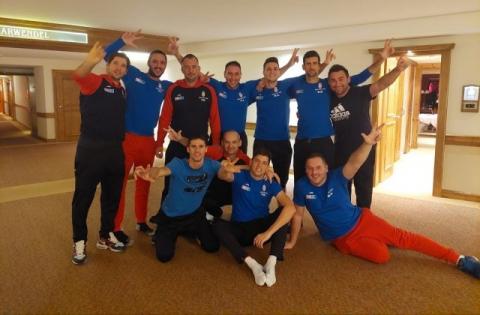 Victory in the decisive double match was achieved by Karatsev and Rublev over Granollers and Lopez, after a reversal, 4: 6, 6: 2, 6: 4.
With this triumph of Russia, Serbia also found a place among the best eight, as one of the two best second-placed national teams.
Viktor Troicki's team has a better set quotient than Spain - 9-6 versus 9-7.
Russia's next rival will be Sweden. As for Serbia's team, it travels to Madrid, where a duel against Kazakhstan awaits us on Wednesday.
Earlier today, the first point for Spain was brought by Feliciano Lopez, with a victory over Andrei Rublev (2: 6, 6: 3, 6: 4).
The unexpected defeat of the 5th player in the world by the veterans was annulled by Daniil Medvedev, who relatively routinely defeated Pablo Carreno Busta (6: 2, 7: 6).
All participants in the quarterfinals of this year's edition of the unofficial world tennis championship are known. Russia, Italy, Croatia, Kazakhstan, Germany and Great Britain were the winners of the groups, while Sweden and Serbia finished as the two best runners-up.
1/4 finals line-up:
Russia - Sweden (Thursday, Madrid)
United Kingdom - Germany (Tuesday, Innsbruck)
Italy - Croatia (Monday, Turin)
Serbia - Kazakhstan (Wednesday, Madrid)