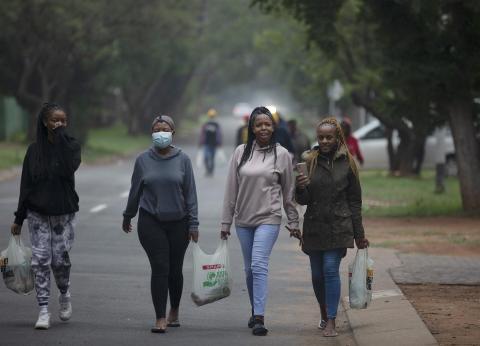 "We call upon all those countries that have imposed travel bans on our country and our southern African sister countries to immediately and urgently reverse their decisions," he said in his first address to the nation following last week's detection of the new variant.

Dozens of nations have blacklisted South Africa and its neighbours since South African scientists flagged Omicron on November 25.

The World Health Organization has labelled Omicron a variant of concern, while scientists are still assessing its virulence.

A "deeply disappointed" but calm-looking Ramaphosa said the "prohibition of travel is not informed by science."

The countries that have already imposed travel restrictions on southern Africa include key travel hub Qatar, the United States, Britain, Saudi Arabia, Kuwait and the Netherlands.

Ramaphosa warned that prohibition on travel would "further damage the economies (and) undermine their ability to respond to and recover from the pandemic".

South Africa, the continent's most industrialized economy, is struggling with slow growth and a more than 34 percent unemployment rate.

The travel bans are another major blow to its tourist industry, which had set high hopes on the upcoming southern hemisphere summer.

Ramaphosa blasted the G20 countries for sidelining commitments made at a meeting in Rome last month to support the recovery of the tourism...