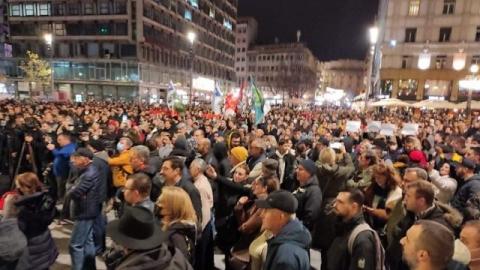 The Serbian Bar Association, AKS, on Sunday urged the President of Serbia, Aleksandar Vucic, not to promulgate the disputed Law on Expropriation by signing amendments to the law that  parliament adopted on November 26.

Protesters say laws are being changed to favour big foreign investers in Serbia, especially Rio Tinto, the Anglo-American mining giant, which is planning to dig for lithium in Serbia.

The AKS said in a letter that the bill should be returned to the National Assembly for reconsideration, listing its objections to the law.

"When you encroach on the sphere of property owners, the state must keep in mind that this is a right protected by the Constitution of the Republic of Serbia but also by the Convention for the Protection of Human Rights and Fundamental Freedoms," media lawyer Vladimir Terzic said.

"Leaving a deadline of only five days for the owner of the real estate to declare himself about the proposal for expropriation is inappropriate, [and is] obviously calculated for the seizure of property in a legal way," he added..

"The government's goal is to pay citizens as little as possible for property, and since the peasants and their fields are currently targeted for the passage of highways and the formation of mines, it is clear that these people do not have the knowledge and ability to declare themselves in such a short time and hire a lawyer as an expert who would help them," Terzic emphasized.

The weekend saw several protests of environmental activists and opposition supporters against the amendments to the Referendum Law and Law on Expropriation.