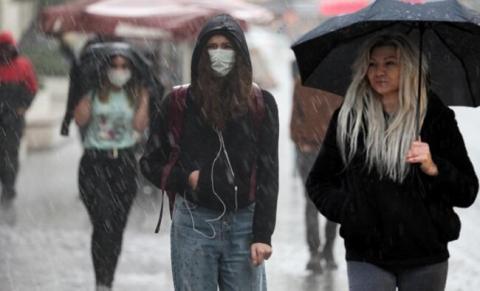 The Meteorological Service has issued a storm warning for several provinces in Turkey's Marmara region.

The strong wind is expected to hit the provinces of Istanbul, Edirne, Kırklareli, Tekirdağ, Kocaeli, Sakarya and Yalova starting this morning.

It also said the expected storm may disrupt transport.

In Istanbul, due to strong wind large waves as high as three meters were already battering the seashore in the Caddebostan neighborhood on the city's Asian side.

He also said snowfall is likely later this week in the provinces in Central Anatolia, including Ankara.

Local authorities in the western province of İzmir also issued a warning against heavy rain and strong wind while the Governor's Office in Ankara cautioned the residents in the capital against heavy shower and wind.

The bad weather conditions are likely to affect Ankara until tomorrow, according to statement from the Governor's Office.

Ferry services between Gökçeada and Kabatepe and between Bozcaada and Geyikli scheduled for today have been cancelled because of the storm, affecting parts of the western province of Çanakkale.